The price includes charter of a yacht with its equipment. Harbour dues, taxes and fuel costs are not included in the price.

The chartered yachts with complete equipment can be used only after the payment was regularly settled (50% upon booking, the rest 4 weeks before charter start).

If the charterer for any reason gives up the charter, he can, if previously agreed, with the owner, cede his rights and duties to another person. If he fails, the costs of cancellation shall be reimbursed from advance-money and that:

The owner will put at charterer's disposal only completely equipped yachts with full fuel tanks and in faultless conditions and expects the yachts to be returned in the same condition. The yachts are put at charterer's disposal at the appointed time, from 5 p.m. to 9. p.m., at the appointed place. If the charterer fails to takeover the yacht within these 48 hours, the owner is authorized to give up the contract. If the owner is not in position to place the yacht at the appointed place 24 hours after the end of the term, or provide another, at least identical or better one, the charterer has right to give up the contract and get the charter money reimbursed.

The owner could reimburse only the amount of the charter, any other compensation possibility is excluded. When taking over the yacht, the charterer is obliged to check and carefully examine the condition of the yacht and equipment according to the inventory list. The possible covered defects on the yacht or its equipment, which couldn’t be known to the owner at the moment of takeover, as well as defects which could arise after the takeover, do not give right to the charterer to reduce the charter price.

If the further cruise is for any reason not possible or the overdue of the disembarkation is unavoidable, the base manager must be informed in order to give further instructions. The charterer bears all the charges of the owner that result from the overdue caused by bad weather. Therefore, the careful planning of a route is recommended. Return in the evening’s hours of a day before check out is obliged. Any exception is possible only if previously agreed with owner. The owner reserve the right not to hand over the yacht if in the judgment of their representatives the charterer is not competent for any reason to operate the yacht, or to give the instructions the charterer's expense.

The yacht is insured against the third person damages and fully insured for all the damages resulting from force majeure up to the registered amount of the value of the yachts for the risks according to the insurance policy. If damage occurs during the cruise and client is not to be charged (due to normal exhaustion or in case of overdraft of the guarantee sum) he must receive permission (instruction) from the owner or base manager for an adequate repair. In case of some bigger averages, as well as of those where the other boats are involved, the charterer is obliged to report the case to the authorized harbour-master's office and record in a protocol (the course of events, estimation of a damage) for an insurance company. The charterer is also obliged to report the owner's office. If the charterer does not fulfil his obligations, he can be in full charged for the costs of damage. The damages on the sails are not covered by insurance and the charterer bears the charges for these damages. The same case is with the damages on the engine caused by the lack of oil. The charterer is obliged to check the oil in the engine every day. The personal belongings are not covered by the insurance and it is recommended to the charterer to do it himself. The crew is covered by insurance.

The charterer or skipper declares undoubtedly that he disposes of all necessary navigational skills and that he possesses the valid license necessary for the navigation at the open sea and the radio-phony certificate, which have to be presented. In case of the yacht or its equipment damage, the charterer is obliged to inform the owner immediately using one of the few telephone numbers written in the document aboard. The owner is obliged to remove the damage upon notification.

If the owner removes the damage within 24 hours, the client has no right to require any reimbursement. The telephone numbers which can be used for notifying the owner are shown in the yacht documents. The client is obliged to notify the authorities and the owner in case the yacht or equipment is missing, if the further navigation is not possible or in case yachts was dispossessed of, prized or if further navigation was prohibited by state authorities or third parties. If the client fails to hold on his obligations he is considered fully responsible for all the consequences for the owner and he guarantees for them.

Only written complaints, signed by both parties on the occasion of return of the yacht will be taken into consideration.

All the possible disagreements or disputes that cannot be settled peacefully, will be under the jurisdiction of the owner's court in Zagreb

Marina "Mandalina" is situated in a picturesque bay of Šibenik, within the reach of the city which is situated in wide bay at the mouth of the beautiful River Krka, one of the most protected natural harbors on the Adriatic coast. more info 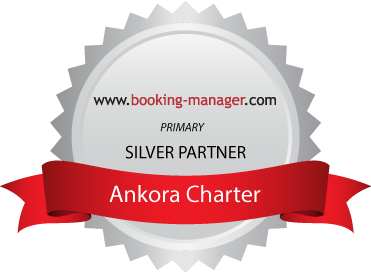 © Ankora Charter 2014-2020 All rights reserved
developed by MMK Systems | powered by Booking Manager
This site uses cookies to provide a better user experience. By continuing to browse the site, you are agreeing to our use of cookies. More about cookies can be found here.
I agree.
Facebook Chat Widget by Digital Inspiration